Well, again it’s been a few months since my last blog…and what a roller coaster ride these past couple months have been!

My new job just wrapped up our busiest season of the year.

My Paleojr finished up 4th grade, and we were all excited to start enjoying summer break and celebrate his 10th birthday!

June is always an absolutely crazy busy month for us, always. Tons of birthdays and anniversaries and graduations and summer parties. We try to squeeze in some vacation too!

The month started off with my Grandma, who I am very close to, having a stroke. It was very bad and she wasn’t expected to make it. That same evening we had my niece and nephews 8th grade graduation ceremony. Then we had a quick, out-of-town work trip. The day after we returned we quietly celebrated my husband’s birthday (June 5th) and then the following day she passed away. It was a rough few days leading to her passing. Such an emotionally draining and heartbreaking experience…to say that I miss her is an understatement.

Next up was Father’s Day and a huge graduation/birthday party for my sister’s 4 kiddos. Carter woke up with a sore throat, and I had my fingers crossed that it was something minor because his celebration was coming up too! A few days later my mother-in-law was flying in to celebrate with us. His throat only hurt for about 2 days and then he seemed to be completely back to normal. We had a great weekend celebrating my nieces and nephews and my dad. Monday was a normal day running errands. I do my meal prep/shopping on Mondays because I’m off, so I drug him with me. We enjoyed a chipotle lunch and shopping together. Everything seemed normal.

Unfortunetly, on Tuesday the 20th, his actual birthday, he began complaining about his tummy and he now had a low grade fever. Wednesday I went to work like normal, and let him sleep in. By the time I got home that afternoon he was feeling very yucky and his feet were swollen and in so much pain that he could not even walk! We quickly went to an after hours doctor appointment and then was quickly taken to the ER. After an x-ray, an EKG, an ultrasound, an IV, a throat swab and lots of poking he was admitted to the hospital for observation.

His tummy pain quickly grew. The swab test came back positive for strep. Every doctor and nurse that checked him said his throat was clear and it didn’t hurt at all so I was very surprised that an entire week after a sore throat, he still tested positive. They started him on an antibiotic and we tried to control his pain. It got so bad for him that he had to take 3 different pain meds, including morphine, around the clock. This went on for what felt like eternity (4 days.) We still didn’t know what was going on. At this point we had to cancel his Birthday party. Then his wrists began to swell and hurt just like his feet. After the 4 days they contacted a rheumatology specialist. After hearing all of his symptoms she thought he had something called HSP. The only way to know for sure that it was HSP was if he developed a rash called Purpura. HSP is a form of vasculitus (swelling or inflammation of the small blood vessels, usually in the skin, intestines, and/or kidneys) It is more common in children ages 3-10 than it is for adults, and boys are twice as likely as girls to get it. From what I understand it usually occurs after a viral or bacterial infection of the sinuses, throat or lungs.  The rash is a dark purple/reddish raised rash. It is caused by the inflamed blood vessels leaking blood cells under the skin. It looks absolutely awful, but it is not painful. At this point we began praying for a rash. Literally.

Sunday morning he woke up with the rash all over his feet. It sounds so crazy, but I was so relieved to see it! I think I burst into tears when I noticed it. Carter’s pain still wasn’t improving so that night he started steroid therapy. He got a heavy dose of prednisone and it started helping by the next morning. We stayed an additional 3 days which made a full week in the hospital! A full week of no eating and no drinking too. We were released from the hospital on June 28th, our 14 year wedding anniversary.

We continued to manage his pain at home and after about a week he no longer had tummy pain. The rash lasted quite a while but it didn’t seem to bother him. His appetite began to come back too. We were able to celebrate the 4th of July with friends. Then 11 days later we celebrated the life of my awesome grandmother.

My little guy is doing pretty good now. We are tapering off the prednisone, which takes a full month. His tummy pain is gone, and there is hardly any evidence of the rash. He is a bit swollen in the face and has a pretty nasty headache about 1-2 times a week, which is unfortunately a side effect of the steroid. We have weekly follow ups with the doctor for 2 months and then a few times a month for the following 4 to monitor his kidney function. So far he is doing great and he has been so brave.

I wanted to share this story because I had never even heard of HSP before. Most people I talk to, including nurses, haven’t heard of it either. I want other people to know what it is so that they can recognize it if their child ever has it. The worst feeling in the world is when your child is hurting and you cannot figure out why….

I also share this story because while we were in the hospital not one time did any doctor talk about an anti inflammatory diet, or just a healthy diet in general. At one point, because he wasn’t eating or drinking at all really, the doctor said he could have anything he wanted. He didn’t really want anything at all, but we brought him some Gatorade hoping he might drink it. Because of his tummy pain the doctor suggested that he not have Gatorade because it contains so much sugar, and in pretty much the next breath they were giving him a 7up…..as if a soda has less sugar than a Gatorade! I guess my point here is doctors don’t prescribe healthy food. They don’t even entertain the idea that healthy food can heal. I don’t think that they are even taught much about diet and nutrition at all in school. It is our job to learn about healthy choices. We have to learn about how food effects our bodies. Google can be your best friend if you use it right. You have to read books and blogs and try some healthy recipes. And remember “You are what you eat” Really is true.

So here are two of my favorite healthy recipes! One of my favorite vegetables these days is cauliflower. I know, a lot of people don’t like it….but it is so versatile! Here are 2 ways to prepare cauliflower. Both are extremely easy, and I promise, if you have an open mind, you will enjoy them.

Wash and “rice” a head of cauliflower with a food processor. Or buy pre-riced cauliflower at Trader Joe’s, Costco, Sprouts.

Add about a tablespoon of ghee or oil to a pan. Add cauliflower to the oil and cook until warm.

Enjoy however you would white rice. Alone or topped or fried with spices 🙂 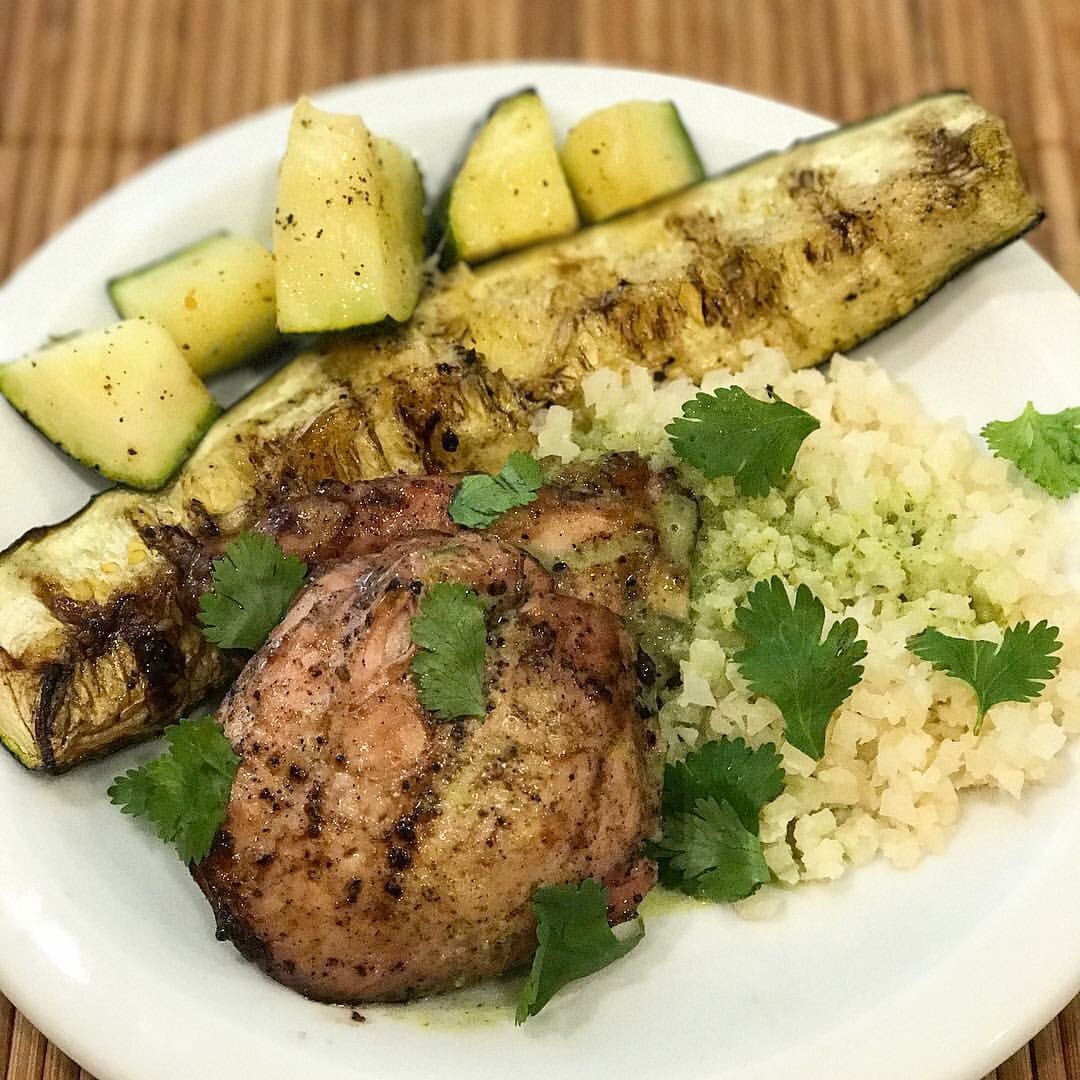 Wash and chop 1-2 heads of cauliflower into florettes.

Line a baking sheet with foil. Toss cauliflower in 2-3 tablespoons of olive oil, a good sprinkle of salt and cumin.

Roast for 30-40 minutes. Stirring occasionally. I prefer my cauliflower very brown and Crispy on the outside and soft inside so I cook it longer. Just keep an eye so it doesn’t burn.

Enjoy as a side dish, alone, or dipped in your favorite savory sauce. 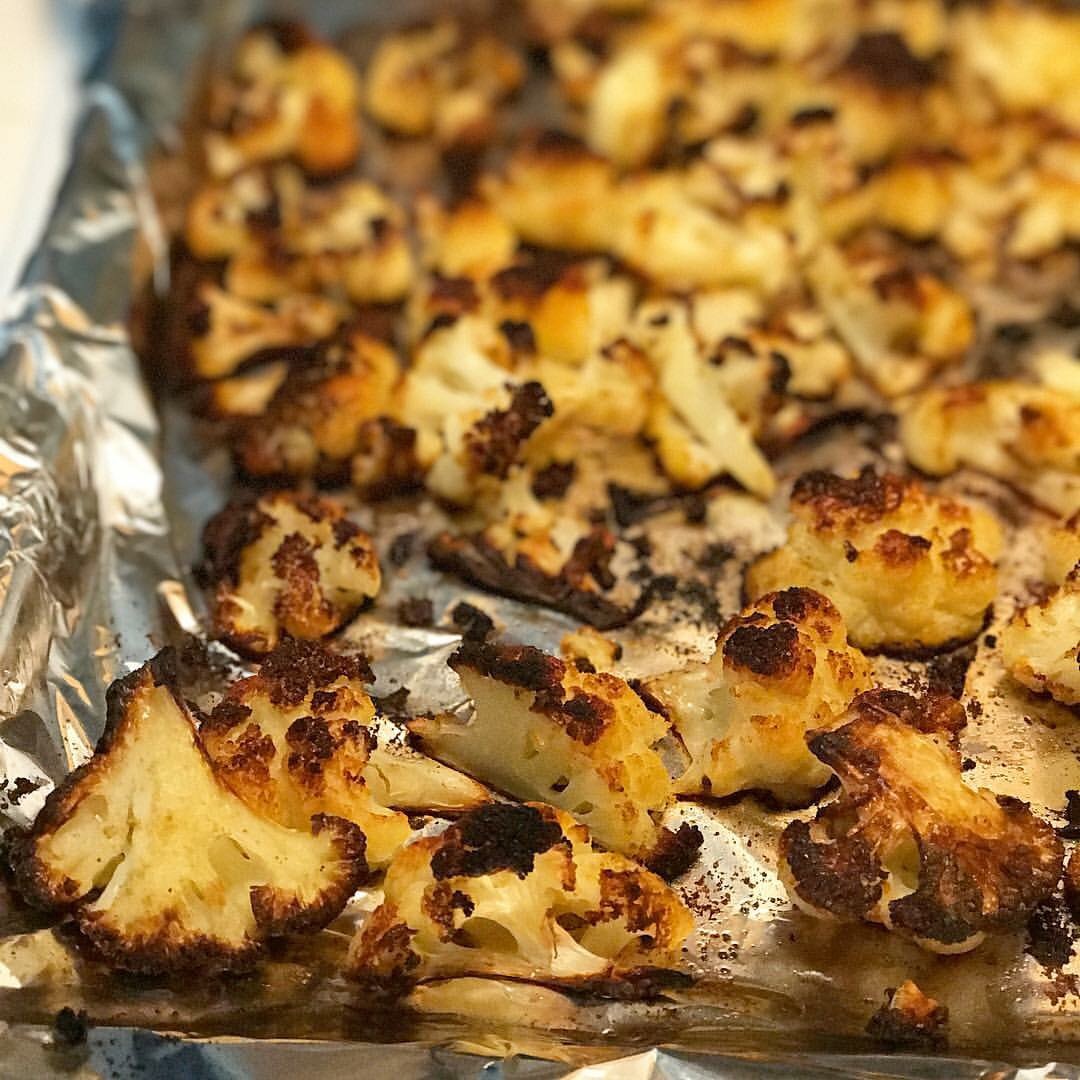